If you can’t make it for the ori

ginal Carnevale di Bosa in February come and see the Summer Carnival called Carnevale Estivo. Along the Corso Vittorio Emanuele and on the main square Piazza Monumento everybody celebrates and enjoys the festival. DJs create party atmosphere and tourists together with Bosan people drink the famous Malvasia wine and sing out loud Italian classics. This festival has been created especially for tourists, that visit Bosa in the summer. Dressed in black and white the traditional colours of the carnival games, people sing and dance along the streets. During the original carnival in February a kind of satiric games are played, where men dress in black as mourning women and in white as the so called “Giolzi”. During Summer Carnival these traditional games are only shown through the costumes.

The parade with all carnival societies and their colourful costumes follows the Corso Vittorio Emanuele up to Piazza Monumento. You can get a taste of Malvasia wine and traditionally cooked broad beans from the Cantinas at Sa Costa, the cellars of the houses underneath the castle Malaspina. The party will last until the early morning and you can meet everyone from your bank accountant to your realter or baker. There is hardly any difference between tourists and Bosan people during the festival, even a swimming ring with a duck head will do the trick. So come and join us and have fun at the Carnevale Estivo in August. 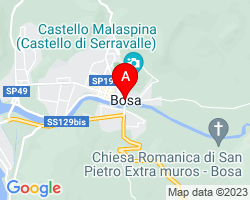